JUST FOR FUN - LOOKING BACK MANY YEARS AGO 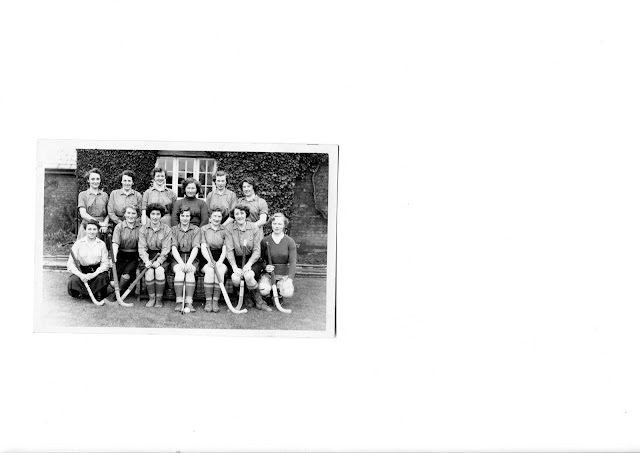 This photograph was taken many moons ago. I cannot make it larger on here or half of it disappears. These were the days when I played in the college hockey team. Oh, to feel as young and fit now! I suppose all the things we have done at variou stages of our lives must influence our writing - even if only subconsciously.

I wonder if any of you who know me can recognise me from the photo. I played left back but that will not help you. Only the goal keeper dressed differently. 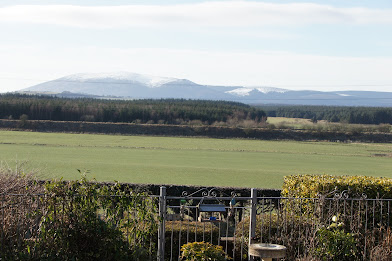 We have not had so much snow as many places in Scotland but it has been very cold, although we are near the Solway Firth.

The name of the hill is Criffel but the peak is covered in snow so not so plain. On the other hand it is usually one smooth looking curve but snow on the various slopes shows up the real shapes of the land. It is a pity the photo is not clearer. 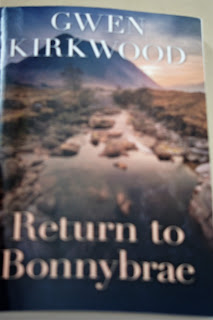 Other news for today is the publication by Ulverscoft  of Return to Bonnybrae in Large Print. These are usually bought by libraries or for people with poorer vision but who still prefer a real book.

Also Beyond Reason is now available as an e-book to download. 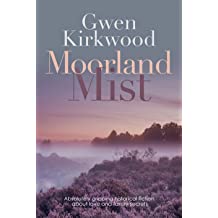 Twenty year old William Sinclair whistled merrily as he strode along. The autumn sunshine glinted on his reddish-brown hair, hinting at a quick temper and passionate nature. He was lean and fit and he loved his native land, especially the farm where he had been born. He had never been to Glasgow but he guessed it was about fifty miles to the North West. Its houses and factories were spreading further out now the railways were weaving their web the length and breadth of the country with branch lines like tentacles reaching out to small towns. Another five years would herald the twentieth century. He wondered if the old queen would live to see it. He prayed the factories and industrial sites, with their iron girders, the dirt and noise and smells, would never spread as far as his beloved green fields and rolling hills and the majestic trees.

He and Emma were to meet where the farm track reached the stream, well away from the farmstead and his mother’s sharp eyes and sharper tongue. Her young maid rarely went further than the farm buildings and nearby fields where the fresh green grass grew and the Ayrshire cows grazed. Today he had promised to take her to the highest peak of the hill land, just beyond their own boundary. If they were lucky, and the day remained clear, he hoped to show her a glimpse of the River Clyde shining in the distance and he wanted her to see how intelligent his two collie dogs were, how they obeyed his commands and rounded up the sheep almost by instinct. As she waited Emma trailed her fingers in the crystal clear water of the burn as it burbled over the pebbles on its way to a larger burn and eventually to the river.  A few golden leaves floated gently down from the trees and she smiled with delight at the sight of a late butterfly. 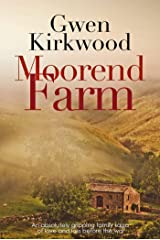 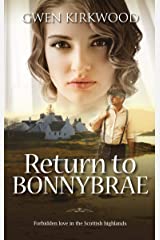 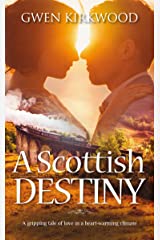 The fifth book - LoveHas No Borders - ends the series with the third generation of Sinclairs at the end of the second world war. The settings move between Scotland and Yorkshire. 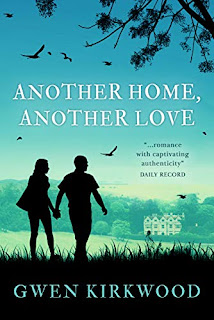 I am happy to say this book is now available as an e-book published by Lume at https://www.amazon.co.uk/dp/B084T36HJ7.

It was orginally published by Hale in hardback and with a different cover so some of you may have read it as a library book. It is now more affordable at £1.99 to download. It is the fourth book in the Home series.

The Caraford family are farmers. They started off in a small holding and worked hard to progress to a larger farm called Bengairney, but they are still tenant farmers. That is not good enough for the snooty Catherine Palmer-Farr although her daughter, Rosemary, counts the Caraford family as her dearest friends and she has spent a lot of her childhood with them at the farm.

She is a young adult now and wants to prove herself as a  business woman by turning the gardens on her father's dwindling estate into a successful market garden enterprise. As time passes friendship blossoms into love for Rosemary and Sam Caraford. Unknown to Rosemary her irate mother interferes and extracts a promise from Sam which is calculated to keep the young couple apart.

Catherines siezes the opportunity to introduce her daughter to the young men she regards as eligible gentlemen but Rosemary is not impressed by their lack of ambition to earn a living for themselves. Tension builds all round and it is not helped my the sly and detestable chef Catherine has employed to turn Langton Tower into a Conference Centre and up-market hotel.


SEVERAL BRIEF EXCERPTS from
Love’s Ransom by Gwen Kirkwood.
This is set in 1603 when clans made their own laws and raiders were hung if caught on another man's land. It is earlier and different to my usual stories.
https://www.amazon.com/s?k=Love%27s+Ransom+by+Gwen+Kirkwood&ref=nb_sb_noss


Isabella Ellwood was too tense to sleep. Every instinct told her something was wrong. Her brother, Jamie, should have been home from the cattle raid by now.

Alexander Latimer declared,‘He is fortunate then, but foolish to deliver himself, and you, into our hands. You must love your brother dearly, Isabella Ellwood.’

‘I know the Ellwood lands are near the border but I thought the English had ceased their reiving since 1603?’
‘Most of the time that is so,' Isabella replied, 'but a family within our barony covets our land and – and more.’ She shuddered and delicate colour rose beneath her creamy skin. Alexander’s eyes lit with admiration. He understood. What normal man would not desire such a girl with her beauty, spirit and courage.
*****
‘I am here because you hold my brother prisoner, Sir. He is innocent. Your men crave the thrill of a hanging. Let them hang me instead of Jamie. A life for a life'
There was a gasp of protest from Sam.
'First may I write my mother a letter?
‘You can read and write?’ Henry asked, his blue eyes alert with interest.
‘Reading and writing! ’Tis all the boy thinks about!’ Sir William said gruffly. He looked at Jamie. `Your sister will stay here in your place, but she will stay as a wife.’
‘A-a wife?’ Isabella’s eyes flew to Alexander’s face. He smiled with delight. Isabella knew he wanted her for his wife. Her heart beat faster, but it was not with the fear or loathing she felt for Neb Truddle. Sir William’s voice broke the invisible thread which drew herself and Zander Latimer together.

‘Instead of celebrating a hanging tonight, we shall celebrate a wedding,' Sir William announced.'I shall enjoy having grandchildren with your spirit , Isabella. Henry, you will have a more worthy bride than ever I could have found for you.’
Zander’s eyes widened, then his face darkened.
‘Me?’ Henry’s face paled in shock and dismay.

‘Of course. Who else can give me grandsons with the Douglas name? 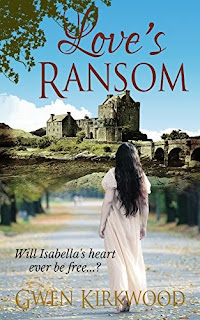 As many of you will know The RNA Scottish Chapter have been holding a weekend of romantic fiction on Facebook with authors putting up a short excerpt of one (or two) of their own books. Everyone who is interested was invited to comment or ask questions. This is the link but there is not much time left to comment and be entered into the prize draw. Even if you miss that you can still see all the books and comments. The link is below under "Discussion"

This was my offering for Saturday but I have been plagued by the internet flashing on and off both days due to the stormy weekend. You can also see the first paragraph in the previous blog. 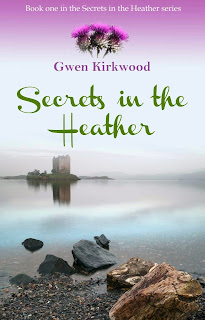 Excerpts from SECRETS IN THE HEATHER


‘Victoria is not coming at all next week!’ Andrew burst out with more anger than he realised.


‘I see.’ Miss Traill frowned. ‘Have you quarrelled?’


‘Not exactly. Mark Jacobs is coming home. She is saving her day off for him.


‘And you think Victoria loves him?’


‘You suppose? You’ve known each other all your lives and you would rather torture yourself than ask her a simple question? I thought you had more courage.’ Andrew flushed uncomfortably.


‘Sometimes it’s better not to know …’


‘Doctor and Mrs Grantly have invited me to dinner next Wednesday,’ Victoria said. ‘Doctor Grantly has an announcement to make.’


‘What has that to do with me?’ Andrew shrugged.


‘Oh Andrew, I know you’re busy and tired, but please don’t be cross. I need you to come. Mrs Grantly says I must bring someone whose friendship I value. You’re my very best friend.’


‘Am I?’ Andrew asked cynically. ‘You’re mixed up, Victoria.’


‘You mean … you’re not my friend? You won’t come …?’ Her voice trembled. Her brown eyes were dark with distress. Andrew felt his heart would burst with love for her.


‘Oh all right. What time?’ Her face was transformed like sunshine after rain.


‘I’ll call for you in the car.’ It felt good to say that, although he barely used it since Mr Rennie died. It cost petrol and he could pedal his bicycle for nothing.


None of the four young people who gathered at the doctor’s house that evening could ever have guessed the secret he would reveal, or known the effect it would have on all their futures.


https://www.isis-publishing.co.uk. For audio book suppliers of Secrets in the Heather

Gwen Kirkwood
I was born in Yorkshire and went to school there.I had three Scottish grandparents and moved to Scotland to work. I met my husband, a Scottish dairyfarmer,and I have spent most of my adult life north of the Border. I have three children and six grandchildren. My background is in farming but I have written more than twenty family sagas and some shorter romance novels.